I received an invitation to moderate a session, titled ‘Entrepreneurship in the 21st Century: Opportunities for Global Youth’, from Mr. Shahid Waseem at the US Embassy in Islamabad. The event was held at the Lincoln Reading Lounge, National Library of Pakistan.

The guest speaker, Mr. Dilawar A. Syed, is the CEO of Yonja Media Group and has previously worked with big names like Deloitte Consulting, Ernst & Young, Yahoo!, SAP and Siebel Systems. In 2010, President Barack Obama appointed Dilawar to the President’s Advisory Commission on Asian Americans.

The discussion started with global business opportunities. He explained the power of social media and elaborated on how it can be used more effectively. He encouraged the youth to come forward with new and innovative ideas and emphasized on the need for more extensive public service. His resolve to serve Pakistan, while carrying out politics in the US was both impressive and inspiring. 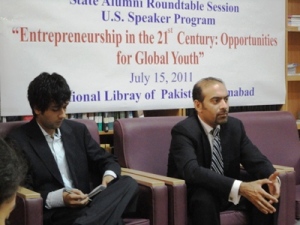 Dilawar was impressed by the energy of some participants who were actively involved in social entrepreneurship. He advised these young participants on how to build upon their ideas.

One thought on “A session with Dilawar A. Syed”